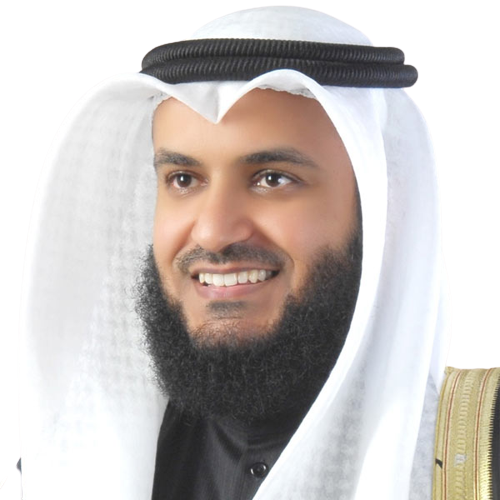 “Be quick in the race for forgiveness from your Lord(Allah), and for a Garden (jannah) whose width is that of the heavens and of the earth, prepared for the righteous – Those who spend (freely), whether in prosperity or in adversity, who restrain (their) anger and pardon (all) men – for God loves those who do good.” (Quran: 3:133-134)

Sheikh Mishary Rashed Alafasy was imam masdjid al-kabeer (Grand Mosque) in kuwait and the great qari of all times due to his believes in quraan.He has read the quran under many scholars like Sheikh Ahmed Abdulaziz Al-Zaiat[1325(H)],Sheikh Abraham Ali Shahata Al-Samanodei [1333(H)] and

many more.He was born in the holy month of Islamic calender i.e., Ramadan and leads his voice to every individual by performing Taraweeh prayers in this Mosque. Being a specialized with ten reading and translations of the Qur’an ,he showered his virtuousness towards common people.

In 2007, Sheikh Mishary traveled to the United States of America and visited two mosques: Islamic Center of Irvine in California, and the ICD (Islamic Center of Detroit) in Michigan. His recitation and audio tapes during his visit to America can be found on Quraan-e-majeed. He was awarded the “1st Arab Creativity Oscar” by the Arab Creativity Union in Egypt. In August 2009, Alafasy released a nasheed video called “Ramadan” , in which he sings in Arabic, English and French. A voice-only recording, it was positively received in the Muslim world with television stations broadcasting throughout the month.

Sheikh Mishary was one of the very few qari’s whose name was mentioned during the month of Ramadan. He was introduced to Qur’an recitation by his Quran teacher Qari Sheikh Ibrahim Ali Shahata Al-Samanodei , He staged Qur’an reciting competitions in his Madarsa to give his students experience.